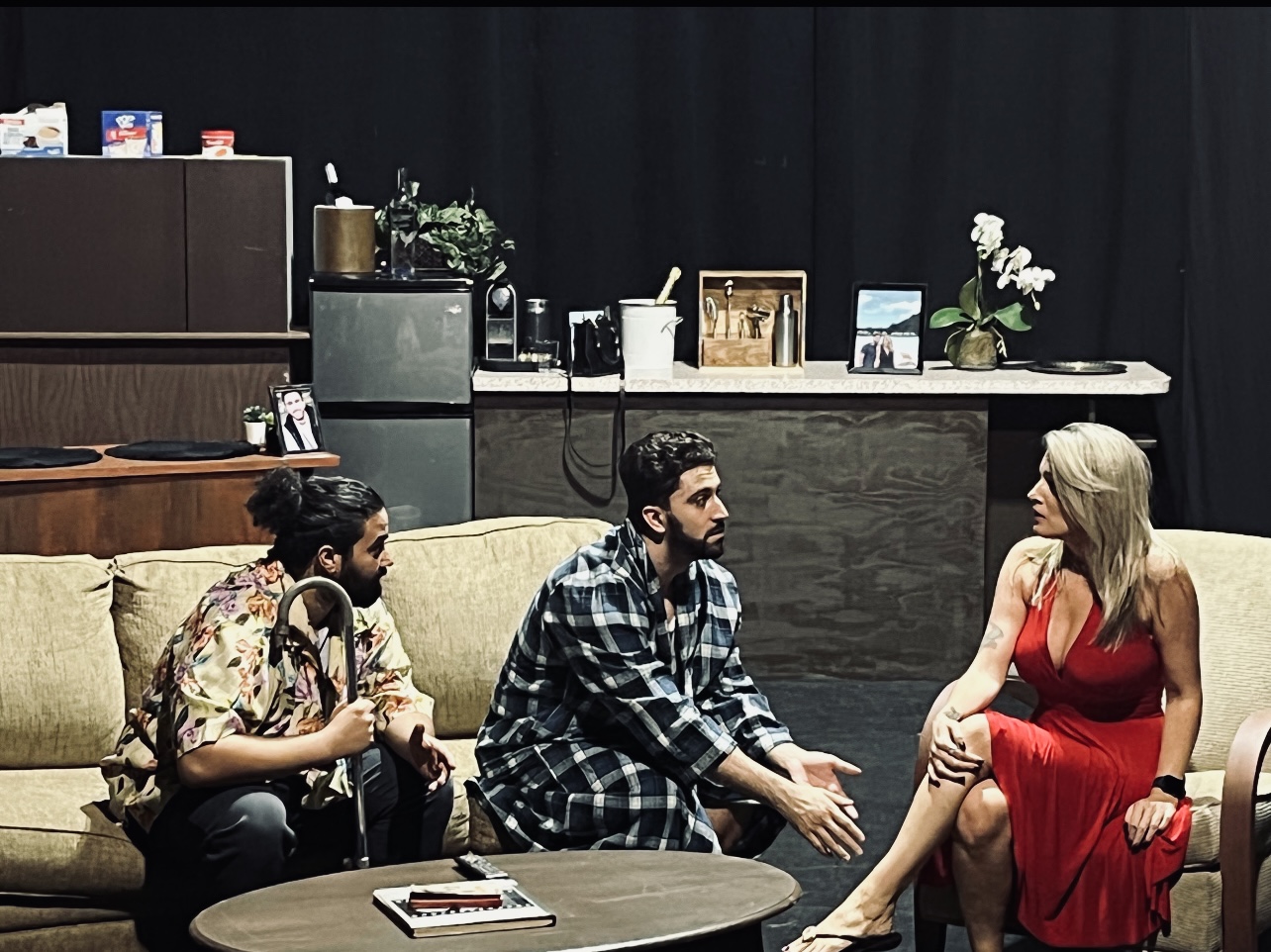 After recently relocating to the east coast from Los Angeles to continue my entertainment and media career, I was beyond thrilled to nab a lead role in my first NYC play last month!

We just wrapped playwright Claude Solnik’s Fun and Games on Sunday, which we performed for the first time off-off-Broadway at Theater for the New City in the East Village.

Productions at this iconic venue have won 43 Obie Awards in total and the Pulitzer Prize for Drama. Sam Shepard used to do plays out of here, along with Tim Robbins, Adrien Brody, and Nobel prize-winner Gao Xingjian.

As far as the plot, “a couple comes up with a daring game to spice up their relationship, and then decide to take things a step further,” Solnik described of his edgy, dark comedy. “A film noir-style play in which the stakes increase as the game gets real and it becomes tougher to tell the player from the played.”

Director Justin Bennett was fabulous to work with and we are so lucky that he lined up such a great cast and crew. The ensemble piece starred myself as Bethany, Joshua Gutierrez as Kevin, Enrique Huili as Nate, Arisael Rivera as Denny, Leo Delgado as Sweeney and Bridgette Leath as a police officer.

We performed eight shows from Oct. 13-23 and thankfully, gained a few nice reviews/comments.

BroadwayWorld.com described Fun and Games as “an unpredictable series of events in which we find out that nobody is who they appear and relationships can be put on and taken off like disguises.”

Reilly graciously expressed that my “expressive voice, limber physicality and display of varying emotion” all “enhance her full-blooded characterization.”

For Joshua Gutierrez, who plays my character’s husband, Kevin, Reilly noted that his “relatable everyman persona enables to convey humor and pathos with effective ease,” while Enrique Huili plays his role of Nate “with appealing youthful passion and comedic flourishes.”

Overall, “this magnetic trio carries the play,” Reilly said of our work.

I couldn’t be more grateful for the experience and opportunity to connect with all of these dedicated, talented actors and showcase many aspects of my energy—it is definitely a form of therapy!

I had nearly 100 pages of text and was in all scenes but one in this 80-minute show. The first scene alone was 30-pages of quick, back-and-forth dialogue—and a lot of action! I was slightly nervous that my brain wasn’t going to be able to operate in that way anymore after the effects from cancer treatment. I’m a two-year breast cancer survivor and it was initially a challenge to get my brain working again, which is why I focus so much on my writing.

While rehearsing for Fun and Games, I also nabbed another spot in a sketch comedy show at a theater in Hell’s Kitchen. More news coming soon!

SPECIAL THANKS: I am so happy that my mom Marion Judd flew up from Florida to see me, along with my college friend and co-bandit Tracy Berdelle, who flew in from the Chicago burbs where we grew up. Hometown pals Leigh Wallace (with her mom Freesia) and Chris Sims — now veteran New Yorkers —came out to support, in addition to marketing and production exec Lisa Long Adler, who came to check us out with her nephew, music PR coordinator and real-life radiant Care Bear, Chris Baer. Last, but certainly not least, my wonderful boyfriend Jake, who had flowers delivered backstage to our dressing area ahead of my performance opening weekend. Also, thanks Claude for the flowers on opening night. Thank you all for making me feel special. New York City, thank you for the warm welcome thus far!